Another FO for the year, I've no idea what yarn I used except it felt like a synthetic laceweight which I then held double in two shades, green and blue. The colours combined remind me of the sea on a clear day, I did add beads to both the cast on and cast off edge but despite blocking the edges curl up far too much to see them.

This knit is the Glam Cowl Free Pattern by Jacqui Harding, very quick to make and a good way to use up two odd skeins I had. If I were to do it again (highly likely) I will do the beads again but add them at all the decrease points for definition. 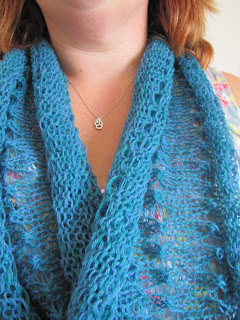