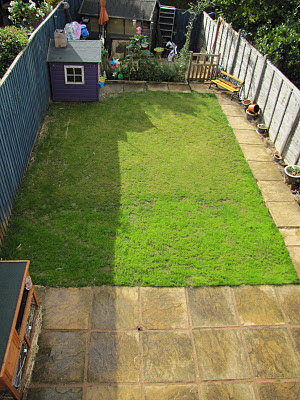 I'm not sure if you can just about see the shed at the very bottom of the garden but with the elements hard at work this last year it had seen much better days and in particular was in need of wood treatment and a new roof. So I set to this weekend and painted the exterior surfaces (3 coats to get it just right) and re-felted the roof. I'm rather pleased with the roof as I suppose I thought it was more a job for DH but when you put your mind to it I think we girlies can achieve even the physical stuff too ;) . I installed a small solar panel on the roof which hooks up to an interior light for when we're hunting in the dark for that ever elusive screwdriver!

Just need to empty the shed and bin all the old pots of paint and broken buckets and spades and it'll be even easier to get at what we need to! 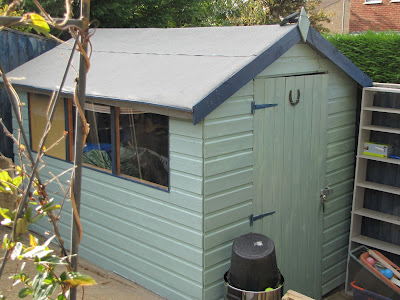 Posted by Clobelle at 11:48 No comments: Links to this post 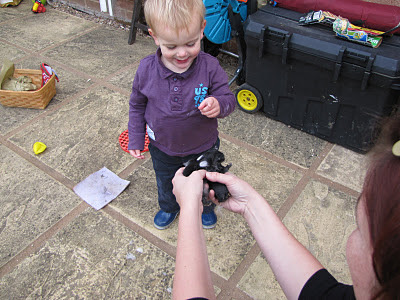 A little picture with my littlest man to show you our 2 newest family members. Bang is doing a great job of looking after them and they're growing really quickly. Their eyes aren't open yet but should do in the next few days x

Pop has returned from his trip to the vets and inspecting his wound area appears to be making a good recovery - we just need to make sure he's eating properly again.
Posted by Clobelle at 09:34 No comments: Links to this post

Ally Pally round up...

We came, we saw, we walked around at least 6 times and we sensibly bought what we had planned to buy instead of too much on impulse! It was my birthday present from MIL to go and we had a great if not very tiring day out to Alexandra Palace for the Knitting and Stitching Show 2011...

hmm what to make?? (actually I have a pretty good idea but can't tell you just now) 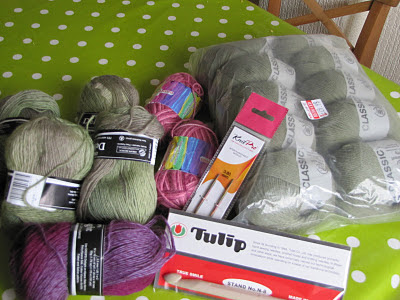 I think I've got a colour palette sorted for this Autumn!!
Posted by Clobelle at 00:01 No comments: Links to this post 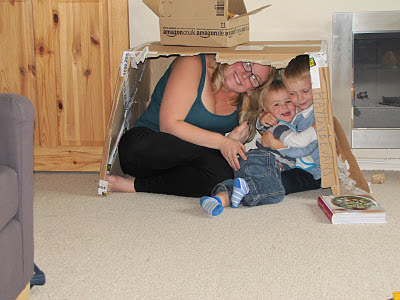 and an aunty makes for an awful lot of fun. I sat back and thought to myself utter nutters and then realised I had to take a picture as it was 'too funny' to coin my eldests favourite phrase!
Posted by Clobelle at 14:20 1 comment: Links to this post

Our two gorgeous girl bunnies have had 2 more gorgeous bunnies, I know they aren't my Grandchildren but they are rather cute and the sight of a little life only an hour or so after it happened has floored me.

May I add here before you're distracted by the pictures that the 'father' was chosen by my dear husband and even when checking pictures on google did we still believe he was a she AND the vet's we took them to got it wrong as well (they didn't claim to be able to tell 100% in their defence).

Ah well, here we are with 4 bunnies instead of 2 - Pop the proud father won't leave Bang alone, we've separated them immediately but he's always by her side through the cage bars which is either a really lovely thought or he's just hoping to get his rocks off again?!?

At 3pm October 10th I noticed Bang (mummy) had an awful lot of fur in her mouth and seemed to be struggling to eat the cauliflower leaves I'd just given them. I opened up the hutch caught her and teased the fur out, she immediately set about eating the leaves with gusto. I was very shocked by the amount of fur in the cage and noticed that her white bob tail had disappeared perhaps she's growing a winter coat I think to myself, so I scoop up the fur and put it in the bin. Next ...concerned something was afoot I went to rabbit.org to do some research... She could be n e s t i n g.
Straight off to the bin I go and retrieve the fur thankfully on the top and not next to any nasties and replace it in the hutch. at 4.45pm I go out to see if all alright and spot the blood on the cage floor immediately check the nest box and find 2 new squiggling, hot bunny bodies.

The way I shouted for everyone to come outside this instance you'd have thought someone was injured, long story short we've a lot of maneuvering of hutches etc and Pop goes to the vets at 9.10am on Friday wink wink... although I am reliably informed he could already have done the dirty after Bang had birthed - oh heck.

We have a vague idea for names but it will depend on whether we keep them - we will look after them until they are old enough to be 'fixed' as we never wanted this to happen and we're not irresponsibly going to let lots of babies come along.

Tiny, very hot and barely a bunny except for bunny ears and teeny tiny teeth... 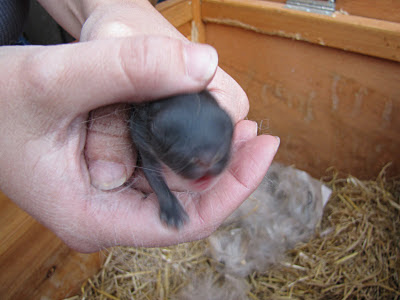 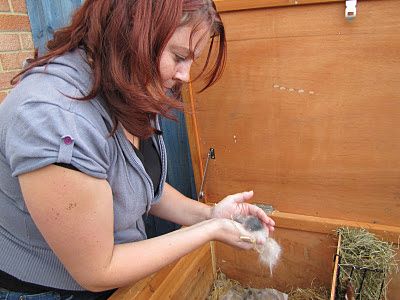 Look at all that fur in the nest - amazing 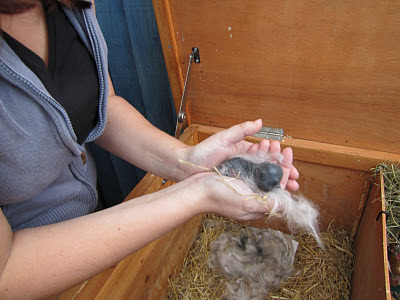 Before any concerned comments are raised, the bunny family are being left well alone with a single physical check each day to make sure that Bang is feeding them adequately and that we haven't lost one in the process. Nice full tummies today so all appears to be going well - it could all change on a sixpence so we're sitting with baited breath for the next couple of weeks.
Posted by Clobelle at 13:52 1 comment: Links to this post

It has been a while since I have baked and then finished off a cake with full icing and presentation. When a colleague asked me (jokingly) for chocolate over 3 tiers I knew just how to surprise her - 33 rich chocolate cupcakes with light chocolate cream cheese frosting and handmade fondant flowers painted and finished with lustre dust. 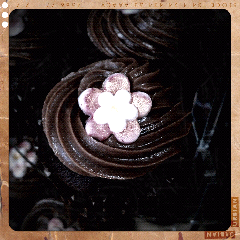 Posted by Clobelle at 07:26 No comments: Links to this post