You'd think that as a knitter I would be fanatical about socks but I'm not as enamoured with them as many others, at least not until recently.

I couldn't see the point when I could buy much better than I could make and even expensive socks were cheaper than the cost of my labour. And that's where I had been going wrong sock knitting is just for fun and relaxation, much easier than I had been making it previously and heaps more rewarding than I thought. Especially wearing one sock whilst knitting the second I got so quick!

The pictures below show two pairs I made last week, ugly utilitarian colours but I wanted to de-stash. I think I may get hooked, all that remains to be seen is how quickly I wear them out, I'm notorious for putting holes in the heels of socks. Are there patterns out there for reinforced heels? 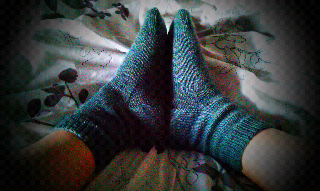